Optical Lens is generally called camera lens or photographic lens, lens for short, its function is optical imaging. The lens is an important component in the machine vision system and has a key role in imaging quality. It has an impact on several of the most important indicators of imaging quality, including: resolution, contrast, depth of field and various aberrations.

There are not only a wide variety of lenses, but also great differences in quality. However, general users often do not pay enough attention to the selection of lenses when designing systems, which leads to failure to obtain ideal images and even failure of system development. The purpose of this article is to summarize the relationship between various factors through the classification and main parameters of various common lenses, so that readers can master the lens selection skills in the machine vision system.

Divided according to the size of the effective image field

The photographic lens is installed at the front end of a large telescopic camera lens, and a large frosted glass is installed at the rear end of the camera camera. When the lens aperture is opened to the maximum and focusing on an infinitely distant object, the images displayed on the frosted glass are all located in a circular area, while the outside of the circle is pitch black and no image. This circular area with an image is called the largest image field of the lens. In the center of this maximum image field, there is an area that can make the scene at infinity a clear image. This area is called the clear image field. The target surface of a camera or video camera is generally within the clear image field, and this limited range is called the effective image field. Since the target size of the camera used in the vision system has various models, when choosing a lens, it must be noted that the effective image field of the lens should be greater than or equal to the target size of the camera, otherwise the corners of the image will be blurred or even no image . 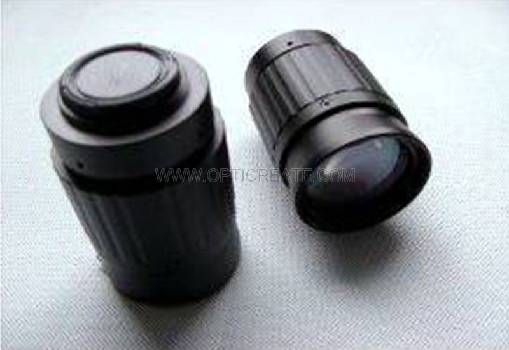 Classification according to focal length

Since the zoom lens can continuously change the focal length value, it is very convenient to use when the field of view needs to be changed frequently, so it is widely used in the field of photography. However, due to the large number of lens elements and complex structure of the zoom lens, the maximum relative aperture cannot be too large, resulting in lower image brightness and poor image quality. At the same time, it is difficult to design various focal lengths and various adjustments. The focal distance is corrected for aberrations, so its image quality cannot be compared with a fixed focal length lens of the same grade.

Divided according to the type of lens interface

The telecentric lens is a lens specially designed to correct the parallax of the traditional lens. It can be within a certain object distance range, so that the image magnification will not change with the change of the object distance. This pair of objects is not available. The situation on the same surface is a very important application.

Ultraviolet Lens and infrared lens, the general lens is designed for use in the visible light range. Due to the different refractive index of the same optical system for light of different wavelengths, the light of different wavelengths from the same point cannot be converged into one point when imaging, resulting in chromatic aberration . The achromatic design of commonly used lenses is also aimed at the visible light range. Ultraviolet lenses and infrared lenses are lenses designed specifically for ultraviolet and infrared.

Next: Features Of Aspheric Lens